I love the fall…The crisp air, leaves changing color, sweaters, PSLs…It really is my favorite time of the year. Mid-September through the New Year. I do look forward to decorating the house for Halloweentime!

That being said, it has been a crazy, hectic travel time as well. After Australia, I’ve been to Minneapolis, MIT in Boston, The Netherlands and now I’m just finishing my trip to New York City. And in between all of this, I snuck the family down to LA for a long weekend to attend Mickey’s Halloween Party and Harry Potter’s Wizarding World. 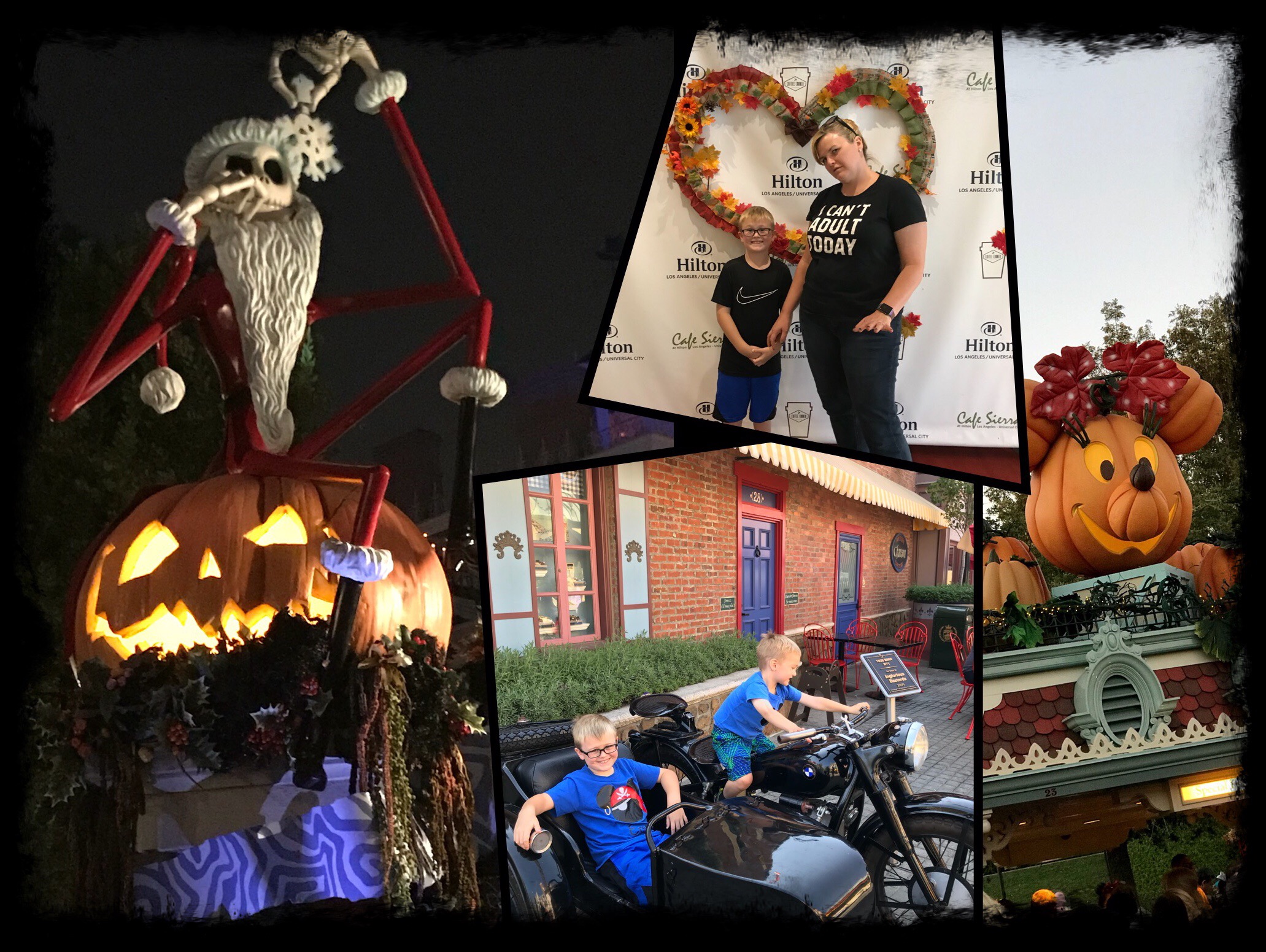 Now, NYC is amazing all the time, but I find it especially special during the fall. The shops are filled with great fall clothes, and there’s that feeling of the hustle and bustle. Love it!

I gave a talk and ran the microscope at City University of New York’s Advanced Science & Research Center in Harlem. Each night, I’d have to myself for walking the city, exploring new eats and cocktails and of course, hit the shops!

Let’s face it, the city will have items you just can’t get anywhere else.

I arrived Monday evening after what was supposed to be a relative short day. A 3 hour delay taking off in Portland changes things though. However, after taking the train into the city from JFK, I still had time to visit my favorite cocktail bar, Death & Co. They have small plates of food and a cocktail program that, IMO, cannot be beat. Last time, I was in the city, I only had one evening and when I went, they were just too busy and I didn’t feel like waiting over an hour. Even on a Monday night, this place was poppin’. I was able to be seated at the bar in the only seat. One of the things I really enjoy about bars is getting to watch the bartenders do their thing. The guys at Death are not pretentious or showmen. They do their thing and they do it well. For dinner, I had some BBQ pork sliders and fries. For drink: “A Clockwork Orange”

This week is the week I will find my buttons I thought to myself. Remember, I’m on the hunt for buttons that will go on my frock & waist coats. There are many great notions and trims shops and it will be a lot of fun to go on the hunt.

However, the hunt for buttons would have to wait because on Tuesday, I didn’t really want to look at buttons. I wanted to hit the shops for what new clothing/shoe trends there were. I hit all the shops you’d expect me to: Saks, Prada, LV, All Saints…Gotta get the upscale goth in…LOL. Then while roaming the upper east side, I found this!

Wow…Phillipp Plein: Swarovski encrusted skulls on everything, muted tones and black. Fabulous sunglasses. Amaze…Did I get anything? Well, you’ll just have to come visit me in person and ask…

Later in the evening, I made my way to Mace, a bar Joyce had recommended. Voted 3rd year in a row for one of the worlds top 50 bars. This year #42. Excited to try something new I made my way to the lower east side…The scene was casual, successful Millennials type vibe. Lots of custom infusions and tinctures lay across the bar. I was pretty excited about the program because they use unusual ingredients like beet juice in their cocktails. I tried the namesake: Mace

Ehhh. The drink was a bit sweet for me. It was beautiful, but I prefer a more boozy style drink and at $16 a pop, I deserve that! I finished with a Negroni, which the bartender made well.

BUTTTONS!!! Back to the button search

OK…Finally being motivated to hunt for buttons, I started out at M&J Trimming. A goto for trims.

I knew they’d have some buttons, but WOW, that was an understatement! 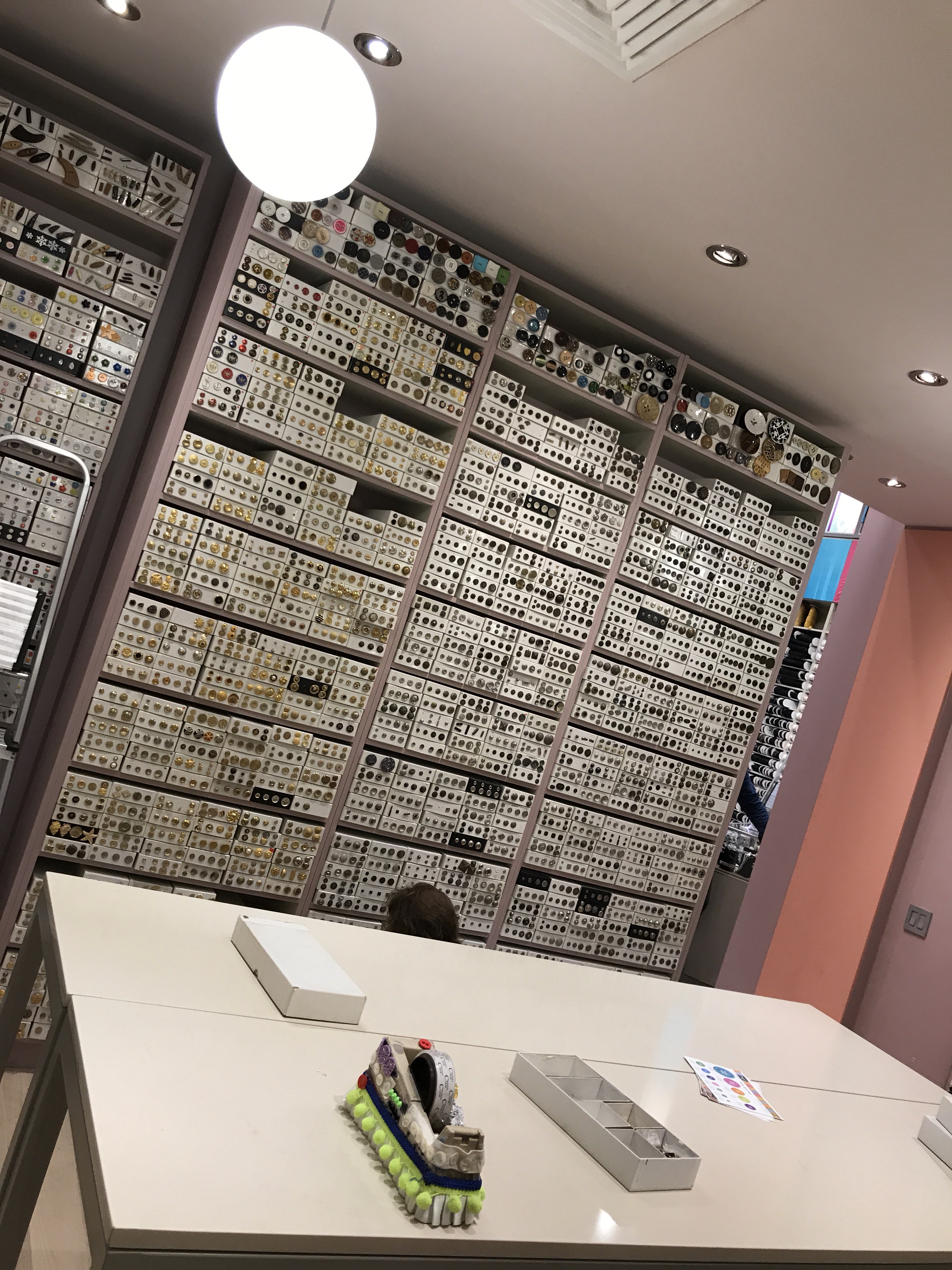 The thing about good button shops is that there are so many options it can really become overwhelming. Gotta keep your eye on the ball. So, I just methodically perused the sections that I was interested in; metal, shell and wood. Now, I did find some options that could work and the price was reasonable. However, there was another another notion store that I needed to visit before committing. 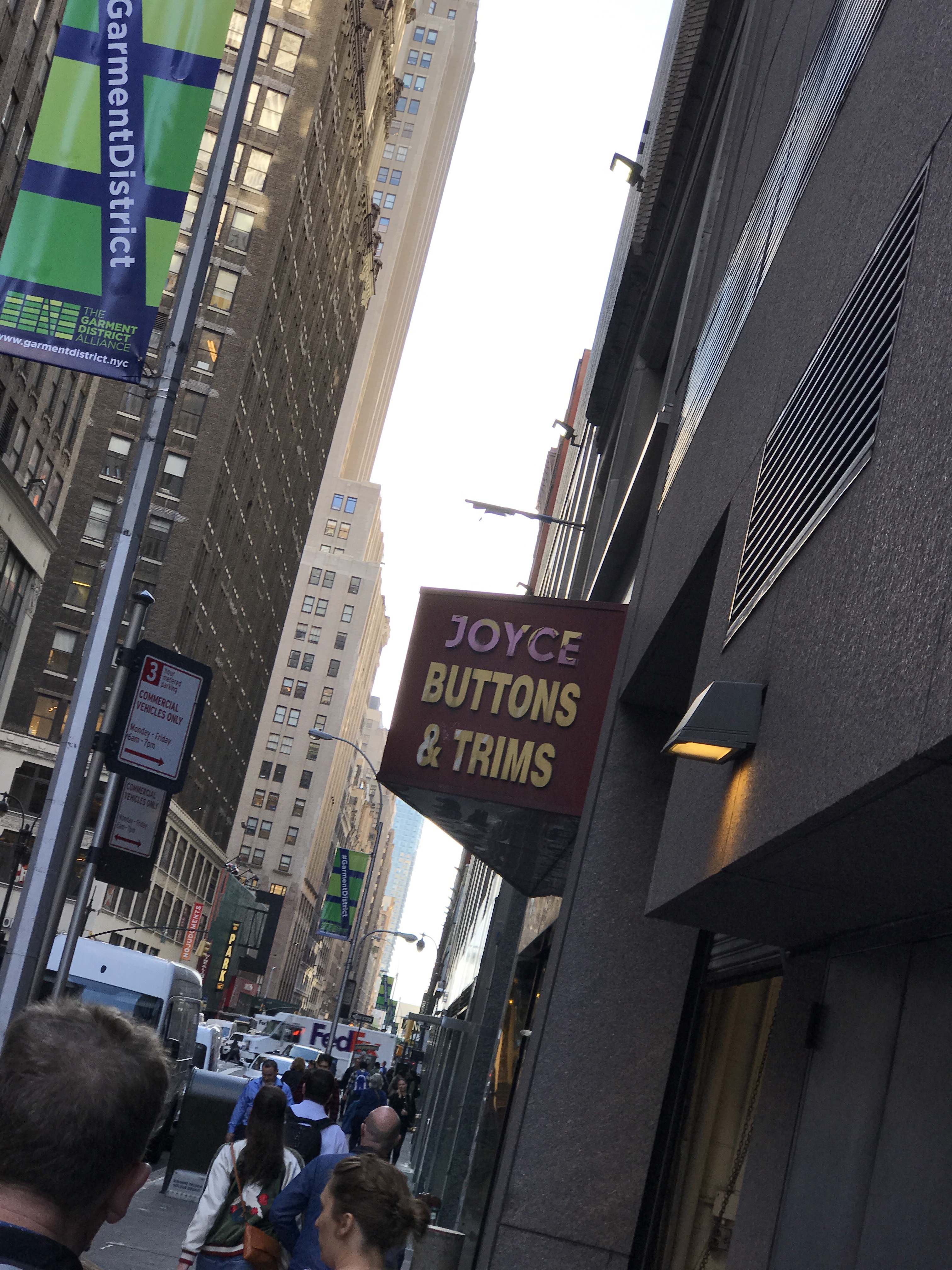 And that is because the name of the store is Joyce – it was like my good friend, Joyce, was guiding me on my shopping excursion. M&J was very organized, but Joyce Buttons & Trim was a little more wild and funky. After after another half of an hour searching and hunting, I honed in on the buttons.

The price was reasonable and the matted gold-tone was just what I had been looking for. The relief on the button is reminiscent of a French motif. C’est fantastique!

So…having looked for buttons for the better part of the summer, I’ve finally sealed the deal with these beauties!

NYC…I worked, I shopped, I imbibed!

Next blog, I’ll actually do some sewing! Bye for now!

One thought on “The Button Search Continues…NYC”